Doc Dalton is a poet, radio show host, ordained minister, and a friend to many people. He writes about his life experiences and to connect with others about their own good times and hard times. Learn more about him by visiting DocDalton.com. 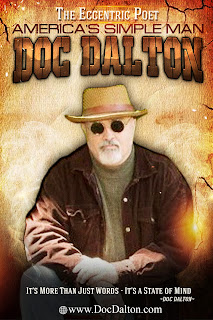 There are many things we want to talk to you about such as, why you are called, America’s Simple Man, and how you feel poetry saved your life. Also, your new book is being released, and there is a lot to talk about regarding Depression, Suicide and Dark Times. Let's start with describing yourself to our readers.

I have said many times over that if it would be possible, I could be the eccentric love child of Bob Dylan and Willie Nelson if they could have a child. I just think different and act different. The older I get, I find myself disliking phonies more and more. I just want to surround myself with good caring positive people who don't bring drama and craziness in to my world. I just need to be me 100% and for those who don’t like it, who cares, they weren't my friends in the first place.

America's Simple Man is a title that you believe in and seem to be extremely comfortable with.

It's been a long road for me, and it hasn't been the best road at times. Some is my own fault and some isn't. At this stage of my life, what I need more than anything is Common Sense and Simplicity, and that is in every aspect of my life including business and faith. I keep it as simple as possible and do my best not to get caught up in the world of Hype, Drama and Bull S_ _ _, and I teach that as well.

To keep this in order, how about if we talk about depression first and then your poetry?

It's well-known and I don’t hide the fact that I suffer from depression and have been hospitalized a few times, not only being depressed but suicidal as well. It's a terrible thing to have, and at times it becomes dark and scary and feels as if someone pulled the floor out from under you. I have been diagnosed with a disease called Sarcodosis and recently learned that it can add greatly to a person's depression. If you remember comedian Bernie Mac, he died from it. As far as depression goes, people should understand that there is help and they should take that help and not put it off. Waiting one extra day could be one day to late. Get your self-help today.

You been called the Eccentric Poet, and you refer often to your poems as God Poems. How did you start writing, and how do you feel it saved your life?

I was hospitalized for depression, and a doctor came to me and said, I do not want you writing a journal, and he had his reasons. He told me to try my hand at poetry and personally, I thought he was crazier than I was. But I was locked in and couldn't leave, so I said to myself, why not? To my surprise, words just started coming out one after the other, and everything I wrote was somehow connected to God.

Till this day it hasn't stopped, and I write like I talk which is cool for me, but it covers everything from God sending Angels who become your friend to Hey Bartender, a shot of Cuervo and some Jesus to go. I believe poetry saved my life because I express things in my poetry in ways I don't think I could otherwise. It's not about who reads it--it's about me keeping my mind calm and at peace while I am writing it. I have been lucky to be published a few times but even if I wasn't, I would continue to write each and every day. It's my personal therapy.

You have a new book being released at the end of this year with several more to follow in 2018 and 2019. Can you tell us a little about that?

Old Dogs of the Whiskey Pie Trails will be released later this year, and it is a combination of poetry, "my poetry" and short stories that are related to each of those poems. Each poem really does have its own story as why it was written and who might be involved within that story. The book itself is spiritual in nature and so will be every book after that. At this point I am looking to do a total of eight books through 2019 as a series which will be called "Watering the Spirit." All will be published with Joseph Martin Publishing. 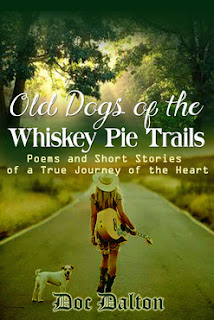 Can you tell us something that folks might be surprised at or maybe even close friends and family don't know about you?

What a lot of people do not know is that I am an Ordained Minister and did so as a personal commitment to God. Kind of a thing just between he and I. There were No other reasons involved. I am a giant believer in Prayer and feel Prayer is the most un-selfish act of kindness that someone can do because you are asking God to help someone with No strings attached. I am Ordained with two different organizations and since being so, I have been asked to perform a number of weddings which I have, but I am more than likely the only Pastor that doesn't charge to do this service. I ask the bride and groom to make a donation to a local charity as an additional way to make their special day even more special. I just can't charge for what I call a God Thing. Because of this, some folks even started calling me America's Simple Pastor. It seems to me to fit nicely with the other title, so I consider it a win/win.

Are there any other projects coming up for you in the near future?

I have an Income Team that I will be promoting shortly that is all about common sense and simplicity. It’s showing folks how it does not need to be expensive, difficult, and time consuming. It shows them how great success can be created by following just 3 Simple Steps and teaching those 3 Simple Steps that should take no longer than 1 minute to learn or teach. Also, I have a video series coming up in the end of 2016 early 2017 called, Simply Dalton. It's just me talking about the important things in life and how keeping it simple is what is really important. The Team will be starting this month and the series is being developed as of this writing.

Can you tell our readers where they can learn more about you and maybe tell us the title of your most recent poem?

I am writing two poems at the moment with one being called "Waitin on an Angel to Take Me Home" and the other is called "Feeling Like a Million Bucks While Sitting in the Five and Dime." As far as learning more about me, folks can go to, DocDalton.com and everything is there from information on up-coming books, radio shows I have hosted in the past, gallery and even my Prayer Church called "Open Air Church of Prayer" where there is never a donation or collection because it's all about Prayer. They should stop by and leave a prayer--it's only a few simple lines.

Posted by Amanda Laughtland at 8:55 PM