Doug Cash is a singer, songwriter, musician, producer, and performer. He is the President of Pryor 2 What ? Records, and owner of Pryor 2 What ? Music Publishing. His work is heavily influenced by Sly & the Family Stone, the Beatles, James Brown, Led Zeppelin, Weather Report, Joni Mitchell, Stevie Wonder, Paul Simon, and Yes. He was raised on big band (Basie, Ellington, Miller, Goodman) and bebop (Charlie Parker, Dizzy Gillespie, Thelonious Monk). In his own words: "I was groovin' with the muse before I could walk."

Listen to samples of Doug Cash's music and learn more about him by visiting http://dougcashmusic.com. 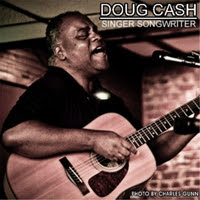 1. How did you first get started playing music?

I was inspired by The Beatles to become a singer songwriter. Namely seeing John Lennon playing "Hide Your Love Away."

2. As someone who has a lot of different musical influences, how have you found your own sound as an artist?

While in high school, I wrote a song called "You Ought to See You." I knew I had reached a new plateau. That's when my sound was born. It took a few years, but I knew it when I heard it. My own voice!

3. What inspired you to start Pryor 2 What? records?

It was all about owning the publishing so I could negotiate with the industry as a label.

4. What projects have you worked on lately that you're most excited about?

I just released my newest compilation, Singer/Songwriter, featuring the singles "Emotional Treason" and "You Wept for Yourself." I've also released a new blues single "Not Waiting."

5. As an artist who has spent many years balancing a "day job" with pursuing your music, how do you keep finding the energy and motivation to produce the work that you love?

Like many musicians, I know what it is to raise a family, while working a full time job, plus producing and recording in the studio, performing on stage, and trying to nail a contract. That was me in my 20s. Many moons ago. I'm now in the fortunate position to be able to focus on my label, write in multiple genres, and pitch to licensing agencies for television, film, games, and commercials.