THUNDERCLAP is originally from the Chippawa, Niagara Falls. He's performed hundreds of times all over North America and Europe. The strength of this performer's originality was honed as a practicing method actor. His approach is honesty without a preconceived outcome, a pinch of poetic justice, a grand gesture or two and voila! one hell of a strange, operatic minstrel that will leave you scratching your head.

Currently in the process of fundraising for his debut solo album, Hellbent on Success, THUNDERCLAP has launched an indiegogo campaign which has raised over $3700 as of this blog posting (June 5, 2013).

For samples of his music, check out his pages on SoundCloud and MySpace. If you're in the Brooklyn, NY area, hear him in person on June 13 at the Northside Festival at Pete's Candy Store. 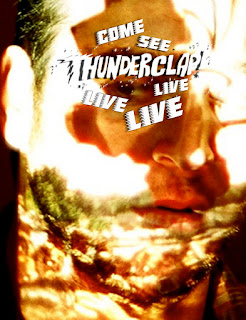 1. How does your experience as a method actor influence your work as a singer/songwriter?

Well as much as I used to think that I was writing lyrics that really meant something to myself and perhaps the general listener, I was wrong. Only after being told by an acting teacher that I in essence sucked (and actually an art teacher years before that), was I able to be educated to why I sucked and and how to not suck. I now can really distinguish. and plot how I want a message to affect the listener in the most substantial way possible. It might sound overly simplistic, but in the film Walk the Line, Sam Phillips gives this pivotal speech to a young Johnny Cash. That speech really sums up what I learned as an actor. That same principal applies to all artistic mediums.

2. Would you tell us a little bit about the breadth and depth of collaborative work that goes into making a solo album?

Quite often over the year that we've been recording, constant eureka moments have come upon us. In light of this, my veteran engineer Gene Hughes keeps reiterating that the learning and eureka moments NEVER stop. And although we have producer Spookey Rubens officially at the helm of this project, the collaboration between Spookey, Gene, and myself is unselfish, fun, and magical. Again, unending eurekas blanket the recording experience of this album.

3. As someone who has funded a lot of the expenses of producing your album (not to mention many other artistic projects!) on your own, what inspired you to reach out to do some crowdfunding through indiegogo?

Believe it or not, where I'm from, I'm probably the first person I know that jumped into crowdfunding. I heard about it, and I acknowledged to myself that my knowledge of marketing and wide social media networking would probably be well put to work on such a project. And I keep telling people: If I only had one dollar pledged to me, it would have been worth it, for the marketing campaign that I launched has had a large wide spreading impact, the value in this as an entertainer is invaluable!

4. What helps you stay motivated, day in and day out, to keep producing your creative work?

As naive as it might sound, at the end of the day my foundation of belief is this: everyone has some value to add to the world, so the creativity I produce "is not for me, and it's not from me." My creative output hopefully serves someone in some way positively in their lives. This reason I give might sound like a "put on," but it's not; it's honestly what I deeply believe. I'm simply a conduit which ideas travel through, and blast into the atmosphere. Boom, spray, twinkle!

5. For people reading this interview who aren't familiar with your work, how might you introduce them to it, and could you recommend a link or two they should start with in terms of getting to know you and your music?

I was spotlighted on a holland based TV show that delves into my life in Niagara Falls:

AND there's a lot of content to view in the media section of the indiegogo campaign itself.

For starters, here's the intro video I made for the indiegogo campaign: