Deborah Woodard was born in New York City and grew up in Vermont. She currently lives in Seattle, where she earned a doctorate in English at the University of Washington, writing her dissertation on American women Early Modernist poets and the romance plot. A widely published poet and translator, Deborah's most recent book is Borrowed Tales, released by Stockport Flats in 2012. Currently, she's researching the Triangle Factory Fire of 1911 for a projected new collection of poems. 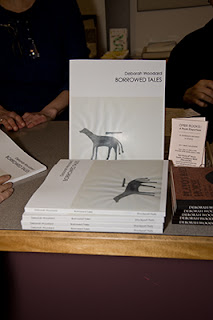 1. Do you remember hearing/reading/writing poetry as a child, and can you identify a point in your life when you started to think of yourself as a poet?

I have a vague memory of my mother reading a poem by John Keats to me. It was probably "Ode to a Nightingale," or perhaps "The Eve of St. Agnes." I didn't write poetry as a child. I wrote strange little stories once a year or so. In the back of my mind, I worried that that rate of production felt like enough to me, psychically. Now, I have finally written a whole book of strange little stories, Borrowed Tales.

2. As someone who has studied with great poets such as Charles Simic and someone who has taught poetry for many years, what do you find to be some of the most effective methods of teaching the art/craft of poetry writing?

It all comes down to encouragement and stimulation. For the last several years, I've taught "writing alongside" hybrid reading and writing classes at The Richard Hugo House, a literary and performance center in Seattle. I teach authors who I want to read, or reread, myself: Emily Dickinson, William Blake, Allen Ginsberg, and so on. This winter, I offered "Reading alongside Local Poets," and that really seemed to galvanize the group. The local poets visited the class, and we used their books as texts. Although, here in Seattle, we're inundated with poetry events and "opportunities," somehow sitting down with the poets for a candid exchange in a small group made a difference. In the last class session, I had students do individual timelines--in pictures--of how they saw the next stretch of their writerly lives proceeding. The results were amazing!

3. What first inspired you to study Italian, when did you become interested in doing translations, and how did your interest evolve into publishing the work of Amelia Rosselli?

Since I never learned to speak any of the languages I studied in school, it took me a long time to end up in an Italian class, I confess. I went to Italy after college, and, as I was a poor traveler, did not get out of Italy, except for a couple of brief forays. After completing my doctorate in English at the University of Washington, I studied Italian "properly," with Giuseppe Leporace, with whom I began translating Rosselli. (As for translating poetry, I'd done a bit, here and there.) Rosselli's first book, Martial Variations, was in a bundle of books a friend of mine in Rome discarded from her library and sent to me for reading practice. I stowed the books in a sideboard, and eventually, pulled out Rosselli, translated a few poems, and got Giuseppe on board. We always intended to publish her, I think, but we worked without publishing rights for many years. Eventually, Chelsea Editions invited us to submit a manuscript, and The Dragonfly: A Selection of Poems, 1953-1981 was the result.

4. Who are some of the individuals that readers will recognize in your book, Borrowed Tales, and do the poems speak in the characters' first-person voices or...?

Hamlet, who opens the collection, and then perhaps McGuffey, who compiled the primers of the same name. I adapted his stories in poems like "Anna's Nettle" and "The Little Violet Merchant." Those poems are fun to perform, almost like little plays. Also, there is a "Deborah" section. Some characters speak in first person, and some do not.

5. In seeking publication for your work, how do you find the best publisher for each unique project?

Small steps can lead to compatible publishers. I republished my little riddle chapbook with Bear Star Press after I was a finalist in their contest. This led to a longer chapbook publication with them, and, eventually, to my first full-length collection, Plato's Bad Horse. The Rosselli translation was picked up by Alfredo de Palchi of Chelsea Editions after Giuseppe and I brought out ten poems in de Palchi's journal, Chelsea. Most recently, Borrowed Tales was picked up by Stockport Flats for their new Confluence Series after I published several poems in an anthology of theirs, American Ghost: Poets on Life after Industry. I liked the look of Stockport Flats' books, and I could visualize my long-lined borrowed tales in their format. Artist Heide Hinrichs designed the cover, basing it on an image from her "Borrowed Tails" show at the Seattle Art Museum. I was then given the better part of a year to revise my manuscript, for which I was most grateful. By the way, Heide and I had previously collaborated on a self-published chapbook, Hunter Mnemonics. One thing leads to another! (Not necessarily quickly, of course; as writers we have to be patient.)

And thanks to Kayt Hoch for the photo of Deborah's books!