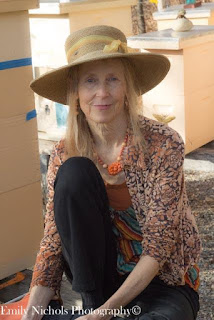 Debra Roberts is an international honeybee educator and advocate. She teaches natural, compassionate beekeeping, and sacred relationship with bees. She stewards her bee sanctuary in the Appalachian Mountains. Learn more about Debra and her Sacred Path of Bee series of classes by visiting her website, HolyBeePress.com.

1. How did you first become a beekeeper?

Beekeeping was never a plan, but it was clearly a call. I sort of stumbled into it in the remarkable way that life sometimes unfolds. In 2004, my health crashed and I took a six-months' sabbatical that changed the rest of my life. As I was recovering, I felt inspired to take a pilgrimage to Hopi to pay my respects to the family of Thomas Banyacya, an elder who had passed and had touched my life profoundly at an earlier time in my life. I had gotten guidance to bring honey as a gift to his family. I wasn't a beekeeper (and I wasn't thinking about being one at the time), but a neighbor of mine sold some honey to me. Off I went from North Carolina, across US Route 40, arriving days later at the Banyacya family door in Arizona, quart jars of honey in hand. Thomas' daughter-in-law, whom I had never met, greeted me at the door. I said I was Debra Roberts from North Carolina and I had just come to pay my respects because of how Thomas Sr. had touched my life. And I wanted to give them a gift. She welcomed me in, received the jars of honey I gave her, and said, "Why I was just telling my husband, Thomas Jr., that we were out of honey and I needed to go to the store to get some more..."

So when I look back, there was something about that moment that marks when bees came into my life... something bee-ish, full of grace, quietly slipped under my radar and into the heart of my life. By the end of that year, I ended up in bee school, and I have been at the feet of bees ever since.

2. What is your goal or intention with your honeybee sanctuary?

I am a honeybee educator, speaker, and advocate. I teach and travel around the world, and I am totally bee-sotted. I am not commercial and rarely harvest any honey. My bee sanctuary is right next to our house in the mountains of Western North Carolina. It is a place that is holy to me. I spend time there every day that I am in town. My path is to explore sacred relationship with the bees, to learn from them, and to inspire and support others in doing the same, and it is also to provide a safe place for bees to flourish in the world. The bee sanctuary is a place I express my respect, love, reverence, devotion, and gratitude for them. This place and space is also to honor others. The sanctuary is filled with precious objects that are meaningful to me and other people, placed mindfully around the bee sanctuary to represent prayers for the well being of the bees, particular people and animals, and for the benefit of all life. As I move around the yard daily, these prayers are regularly enlivened. More than anything, the bee sanctuary is place of expressing and sharing my love for these precious wing-ed ones and for creating a healthy place for them to thrive, especially in these times where their health and well-being is so challenged.

3. What inspired you to create your Sacred Path of Bee series of classes?

I fell into friendship years ago with a wonderful woman named Layne Redmond, who was a renowned frame drum teacher, musician, researcher, and artist. She and I discovered, in our unfolding friendship over the years, that many of the experiences I was having in my sacred-in-the-ordinary bee-tending life were resonant with some of the ancient ways of the bee priestesses that Layne had been exploring while researching what later became her seminal book, When the Drummers Were Women. Neither of us called ourselves bee priestesses, but nevertheless, those words help describe a sacred territory that was so enlivened in our lives. Layne invited me to share about bees and the sacred many times in her gatherings and conferences, and we went on to create a free public offering on bees and the sacred with the intention of later co-creating a multi-part online series. Unfortunately, Layne passed away in 2013 so I went on to create the series myself. I launched The Sacred Path of Bee in August of this year, and it is offered in her loving memory. The other source of inspiration for this series are the honeybees who have colonized my mind, heart and consciousness and inspire me every day of my life.

4. Who are some of your special guest collaborators in The Sacred Path of Bee?

I have invited ten remarkable people from around the world to join me in this series. Each are a world and a wonder. To describe just a few of them, I have invited Jacqueline Freeman to join me, a visionary who communicates with bees and who wrote the widely acclaimed book The Song of Increase, Returning to Our Sacred Partnership with Honeybees. Also invited is Horst Kornberger, who wrote Global Hive, Bee Crisis and Compassionate Ecology, who teaches at the Rudolf Steiner College in Perth, Australia. And there is Kaylynn Sullivan TwoTrees, an artist, educator, activist, and elder who has spent her life at the crossroads, where species, cultures, beliefs and the unknown intersect, collide, and evolve. All ten guests bring a unique perspective to our understanding of bees and their vast blessings in our lives. 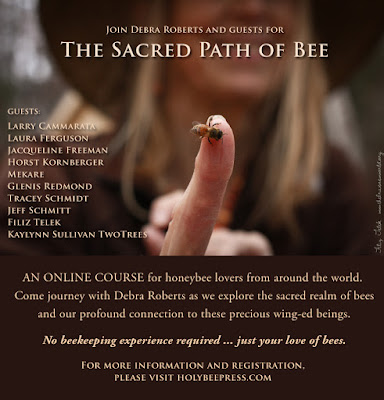 5. Why is it important for us to forge more connections with bees in our world?

Since Colony Collapse Disorder reared its head in 2006, it is now much more widely and commonly known that we depend on honeybees for over a third of the food we eat (and I would add, food we really enjoy eating). From my years with the bees, I think the opportunity they bring in helping us to understand some of the deeper issues and opportunities in life is even more important. It is my belief that many of the challenges in this world stem from our disconnect with nature--both within us and outside of us. When we steward bees in a bee-centric rather than bee-business-centric way, there is an opportunity to learn about the interconnectedness we share with all life. A higher consciousness naturally is awakened and enlivened when we spend time with honeybees in a respectful way (rather than treating them as livestock). More women than ever have stepped into the world of bees in unprecedented numbers. This started around 2007, and I believe it represents a compassionate response to the challenges bees are facing. I see this compassionate expressed in both the men and women I teach in the world and who are participating in the Sacred Path of Bee series. I celebrate the growing numbers of beekeepers and bee appreciators that are taking an interest in the bees with a primary intent to help them. If there is any one simple thing I could say about my own life with the bees, it's realizing that love itself is the ultimate activism. The Sacred Path of Bee is my offering to the world and to the bees, in the hope that more love can come their way and spread around to the rest of life. For it is sorely needed... and it's time.