Michael "Lyfelong" Foster is a Filmmaker and Entrepreneur who has overcome many obstacles to achieve success. He has traveled nationally and internationally showcasing his films and connecting with audiences to show them exactly what The Michael Foster Experience is.

To learn more about his work, check out Reel Lyfe Cinema volume 1. 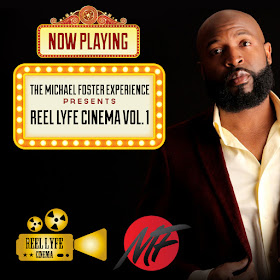 1. As someone who has always been involved with the arts, when did you decide to take up filmmaking?

It was around 2009 when I officially decided to take up filmmaking. I had so much experience writing creatively and doing TV production that I was already on the path. I remember I started writing out treatments and concepts for short films, but the problem was at that time I had no idea how to write or structure a screenplay. On top of that, at that particular time there wasn't a lot of people I knew that I could bring on board to help execute my vision. Some of that may have been because I hadn't done it (making a film) before and they knew me as the "Swagger TV" or "rap" guy. I decided to enroll in film school and learn the ins and outs so I wouldn't have to rely on others to execute my visions and to be taken seriously within the film industry.

2. Your films are driven by compelling main characters. How do you come up with the ideas for these characters and their experiences and struggles?

One of my favorite professors, Professor Keith Thomas, always would say you can find a story anywhere. So sometimes I would have ideas and concepts here and there that may have been inspired by something I saw or experienced firsthand in my everyday life. Maybe there was something I read in a newspaper article or blog post, or overheard in a simple conversation. Also, I spent a lot time writing songs for about 20 years, so I kind of adopted the same method to come up with characters and concepts. I listen to an instrumental over and over and whatever that music says to me determines what kind of character is constructed and what the tone of the story will be. Plus, starting out you're not working with a ton of money for explosions or aliens, so you have to make your story revolve around compelling characters and dialogue, and that's an area I excel in.

3. You seem to cover every aspect of filmmaking from writing, directing, producing, acting, and editing. Which of those are your strengths, and which ones do you enjoy the most?

I would probably say I'm strongest in writing since I've been doing that the longest, and all I need to do that is my imagination. After that I'd say directing because it's about having vision and being able to communicate with your actors/actresses in a way that empowers them to give their best performance. I feel like I do a great job with that. As far as what I enjoy the most, it really just depends on what I'm doing at the time because I truly just love creating. When I'm acting, I love being able to bring a character and dialogue to life. When writing, I love creating worlds on a page that was once blank. I can tell you the most stressful is producing because, of them all, that actually feels like work. You have to rely on so many things to go right and are responsible for pulling it all off with normally little to no praise.

4. Would you tell us a little bit about your fashion line?

Inner Elite is more of a Lifestyle brand. It represents a certain type of mindset of those who truly know what it takes to be successful. We decided to first represent the brand through fashion because wherever I'd go, people would always pay attention to what I was wearing. You'll be seeing the brand in a lot more places internationally in the near future.

At the top of the year we'll be officially launching the Talent Management/Business Consulting division in which we'll serve as a place to help those with elite level creativity become even better entrepreneurs and assist in guiding their careers to the promised land. We already have a number of actors/actresses, music artists, fashion designers, models and more on an international level that are looking to make the roster. But to be a part of the roster, you have to be the best of the best because that's what it means to be a part of the Inner Elite. As far as the fashion side of things, our President, James Saunders, will be focusing on growing that division. He already has a number of great ideas that will get us where we want to be. Our plan is to be one of the most recognizable brands on the planet.

5. What projects are you currently working on, and is there anything else you'd like readers to know about you and your work?

I have a feature compilation project currently out titled "Reel Lyfe Cinema vol. 1." That's a series of short films that I toured with on the national and international film festival circuit. It really touches on some very serious issues that we were able to bring to life with great leading actors and actresses. Shelton-Demar Lewis, who stars in "When Tables Turn," is a frequent choice of mine to work with because of his reliability, skill set, and passion. Actress Vee Wess will always hold a special place in my heart because she was the first person to ever believe in me as a Director in my first film "Evelyn Black." She's like the big sister I never had and one of the most talented actresses I've ever met. I've never seen a project quite like it as it consists of moments in time that can never be duplicated. I wanted this project to take people on a journey, and from what I've heard so far, it does just that. It can be downloaded at my website TheMichaelFosterExperience.com.

I'm currently close to wrapping up production on a feature film titled "#aSocialLoveAffair" that is being co-produced with a new media platform titled, "The Distinguished Network." Their focus is to provide an alternative platform for independent content creators around the world and put more focus on them and their work. Their CEO, Cleveland Elam Jr., wanted me to be the first filmmaker they partnered with, so this film will be the first one to debut on the platform in early 2017. The film is a romantic drama about how social media has such an impact on relationships this day in age. It stars Dorothy Lucey, who is also an award winning filmmaker, and myself along with supporting cast Shelton-Demar Lewis, Vee Wess, Nelson J. Davis and Brynn Mosley. It's been a joy working with the cast and crew, and we've really become a family. This is my first narrative feature film, so I'm really excited about it. It's taught me that producing a feature is truly a marathon and not for the faint of heart. You really find out what you're made of during the whole process.

I'm also in post-production for a short music film titled "Last Night in Panama." I was hired on to write and direct this piece by World Artist, "Zozan World." This is special because we actually went to Panama to shoot it. With this project and others to come like it, the focus is to bridge the gap between people of African and Latin descent through music, dance, and film.

Other than that I have more ventures and projects that are very major in the works on an international level. They involve some things that have never been done before, so let's just say I'm very excited about what the future holds. For those that want to keep up with it all, just go to TheMichaelFosterExperience.com.