Caroline Olah is the creator and designer of the Little Viper. She designed the bracelet from scratch, working diligently for over a year to bring her sketches and ideas to fruition. Caroline is a NW Indiana/Chicagoland native where the Little Viper is assembled, packaged, and shipped from. The Little Viper does business with end users and distributors/retailers all over the United States. You can find out more about the Little Viper at www.LittleViper.com and on YouTube. 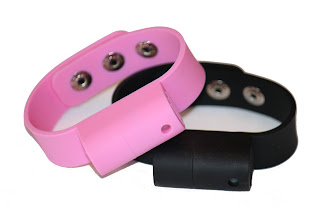 1. How did you come up with the idea for the Little Viper?

I have two daughters, ages 15 and 12. Dropping them off at the local mall isn't the same as when I was their age. There's always the risk of danger, so I would give them a small can of pepper spray. However, the cans on the market are ones you have to hold in your hand. Inevitably, they would have to put them in their purse or sweatshirt pocket--thus, if someone attacked them out of nowhere, they wouldn't be able to even use them! Pepper spray on the market (before the Little Viper) was only a viable option if you had it in your hand and were ready with it.

Thus, I decided to design a pepper spray bracelet. I wanted something that also looked fashionable so people would enjoy wearing it while it served a dual purpose of function and fashion. Furthermore, I knew that most pepper spray products on the market are cumbersome, resulting in many people not wanting to carry them. The Little Viper is something that can be worn anywhere at any time, without anyone even knowing you're carrying pepper spray. Think about it: would you ever bring a small can of pepper spray on a blind date or while shopping at the mall and keep it in your hand the entire time "just in case"? Probably not. But now, you can wear this adjustable fashion bracelet and nobody will know you're carrying pepper spray--truly, "ready at a moment's notice." The Little Viper is a self-defense item that is aimed at allowing the victim just a little bit of time to escape, alert others to help, and give the victim a "chance" to get out of the situation unharmed. It's intended to be that "extra help" you need when danger arrives.

2. Could you tell us a little more about the design: how did you make it easy to use yet also difficult to discharge accidentally?

I took over a year designing it and ensuring it was a quality product. I tested different materials along the way until I was sure that silicone would offer the best functionality and fit. The bracelet is silicone and adjustable as well. I designed it to fit "most" wrist sizes with 3 button snap lengths. It houses a small pepper spray canister that has to be firmly pressed on both sides. It's very easy to use but very difficult to be discharged accidentally since you need your fingers (or something else) pressing both sides at the same time. Unlike most pepper sprays on the market today, you aim the Little Viper at your target and press the sides--that's all there is to it. No switches to disengage, no extra buttons to press. Likewise, the silicone bracelet is both fashionable and comfortable for everyday use and also water resistant for joggers, hikers, and other sports enthusiasts who may sweat while participating in their adventures.

3. What's the actual size of the product, and do people who see it generally just think it's a fashion bracelet?

The bracelet is "one size fits most" and is 8.5" long. It has three buttons so you can adjust it according to your wrist size. It weighs just 1 ounce and contains 3-6 bursts of pepper spray. When people see it, they have NO idea it is a pepper spray/self-defense bracelet. You can't see the pepper spray; there's no indication of it anywhere visible to the normal user.

4. What feedback have you received from people who have tried the product?

So far, the feedback has been nothing but great. We've had many people buy more than one, usually for their sisters and even daughters. We had one customer buy one for everyone in his family--and he also had a daughter in college whom he asked me to ship it to directly. Our Facebook page has had some great comments from customers and even Amazon has one or two 5-star reviews as of today, and we just launched the product in July.

5. Why is pepper spray a good option for self-defense for both men and women, in your opinion?

Pepper spray is an excellent self-defense product. It is used by nearly every law enforcement agency throughout the country. It is non-lethal and extremely effective when sprayed in the facial area and eyes. It puts a safe distance between you and an attacker and gives you plenty of time to escape and seek help. Most people don't want to have to carry a handgun around for self-defense because of the possible danger involved. However, they are very open to carrying pepper spray since they know they won't accidentally shoot themselves, a loved one, or a stranger and risk killing them. Since it is non-lethal, people are also more likely to use it instantly without hesitation. Acting quickly can often avoid serious injuries and save lives.

Pepper spray's active ingredient is oleoresin capsicum (OC), which is derived from Cayenne peppers, some of the hottest peppers in the world. Contact with eyes, nose, throat, and lungs cause immediate dilation of the capillaries and will create an intense burning sensation. However, pepper spray will cause no lasting after affects. Because pepper spray is an inflammatory agent and not an irritant, it is effective on those who feel no pain such as those under the influence of drugs and alcohol.